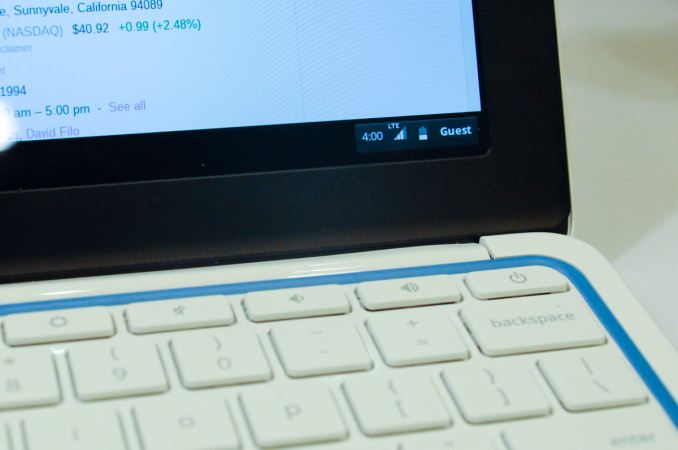 We reviewed HP's Chromebook 11 a while back in the WiFi-only variety and found it to be an interesting value play for Chromebooks, even though the Exynos 5250 left a bit to be desired when it came to performance while multitasking. Earlier I also wrote about seeing Altair's single mode LTE platform at CES which powers the Ellipsis 7 tablet on Verizon, and that they had alluded to another upcoming device headed to Verizon with their cellular connectivity inside – the HP Chromebook 11 with LTE.

Today the Chromebook 11 with LTE is available on Best Buy's website for $329 after a $50 account activation rebate with Verizon. Inside is the same Altair FourGee 3100 and 6202 RF transceiver as the Ellipsis 7 tablet we took a look at. This is a category 3 LTE device capable of attaching to Verizon's Band 13 network, again there's no 3G EVDO or 1xRTT to fall back onto, just pure LTE, which is partly what allows the Chromebook 11 to include cellular without a much larger premium over the WiFi-only variant. I had a brief opportunity last week to play with a prototype LTE-enabled HP Chromebook and run a couple speedtests, which were comparable to what I was getting on other Verizon LTE devices. Verizon opening up the opportunity for OEMs to go LTE-only will make 2014 an interesting year with even more devices shipping with cellular options sans hefty premium.