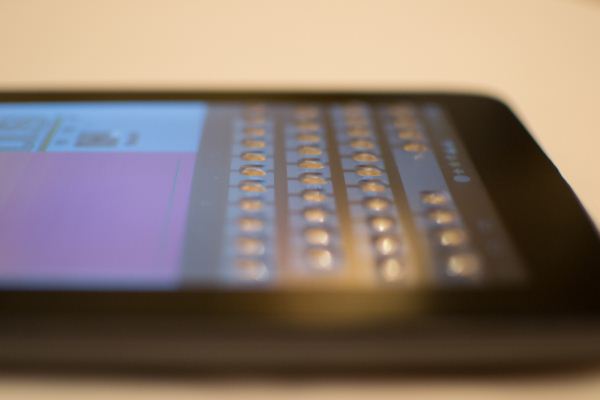 One of the hardest leaps to make in entering this modern era of mobile phones was the idea of using a touchscreen keyboard. Losing our beloved keys was anathema to Blackberry and Treo users. But what if you could get a little of that back? Tactus has been exploring that idea almost since the iPhone’s first announcement. By combining a small pump and an array of microfluidic channels and chambers on a plastic panel, they can bring topograph to otherwise flat touch screens. The keys raise on demand when the keyboard is called, and will disappear when the keyboard is no longer needed. The technology is still very much a work in progress. The demo device they showed off has a single portrait keyboard configuration, and while raising takes a quick second, evacuating the chambers takes considerably longer. Dr. Craig Ciesla, founder and CEO of Tactus , says reliability concerns have largely been dealt with and they’re well on their way to bringing the technology to phone sized devices, as well as refining their larger offerings. The technology is still in its earliest days, but we’re excited to see where it gets.
Gallery: Tactus Gives Touchscreen Users Something To Touch
Tweet
PRINT THIS ARTICLE
Comments Locked