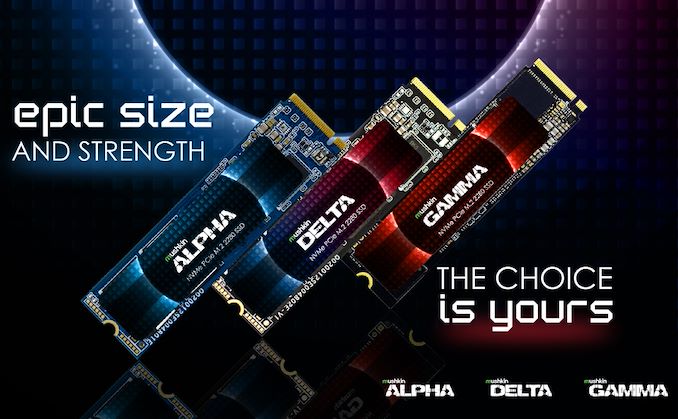 The new Mushkin DELTA series and their existing ALPHA series both use QLC NAND, but the DELTA is not a complete replacement for the ALPHA. The DELTA does offer a performance boost due to the faster controller supporting PCIe 4.0, but that faster Phison E16 controller also takes up more PCB area than the compact Phison E12S controller used in the ALPHA. That prevents the DELTA series from offering an 8TB option. The ALPHA series is focused specifically on extreme capacities since it only includes 4TB and 8TB models, while the DELTA is a bit more mainstream with 1TB through 4TB capacities.

The new GAMMA series is Mushkin's new flagship based on the Phison E18 controller. Performance specs are similar to other drives based on the same reference design, with sequential read speeds of over 7 GB/s and peak sequential write speeds starting at over 5.5 GB/s for the 1TB model.

For both the DELTA and GAMMA series, Mushkin's initial pricing is in line with street prices for other drives based on the same hardware. Among that club, Corsair's MP600 CORE and MP600 PRO SSDs come with substantial heatsinks, while Mushkin is following the approach taken by Sabrent, Inland and other brands by keeping the drives slim and leaving any heatsink up to the end user.

Mushkin hasn't specified the exact NAND used in these new drives, but we expect them to both be using 96-layer 3D NAND. Later this spring we will see a new round of high-end Phison E18 drives adopting Micron's 176-layer 3D TLC for marginal performance improvements, but it's still a bit early for Mushkin to be including the new NAND on the GAMMA.