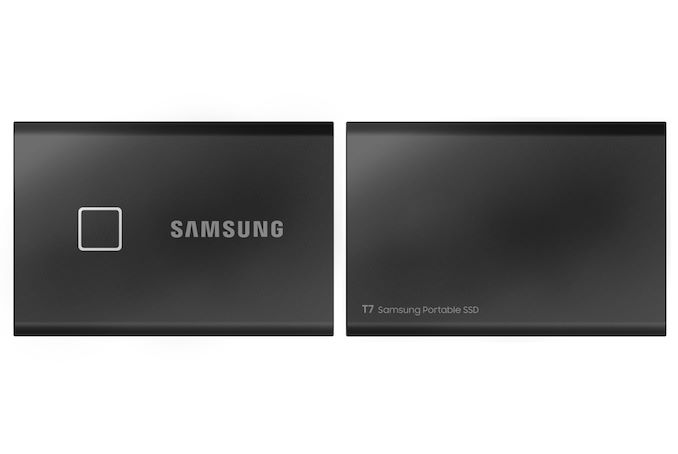 Samsung's mass-market external drive, the Portable SSD T-series, was last updated in August 2017 with the introduction of the T5 with 64-layer V-NAND. The Portable SSD T5 came with a SATA SSD internally and a USB 3.2 Gen 2 (10 Gbps) Type-C port for the host interface. Since then, we have seen a number of technology updates in this market segment including newer flash generations and the introduction of NVMe - USB 3.2 Gen 2 (10 Gbps) bridge chips.

At CES 2020, Samsung is unveiling the Portable SSD T7 Touch and also announcing the Portable SSD T7. Both products place a NVMe SSD behind a USB 3.2 Gen 2 bridge to offer up to read/write speeds of up to 1050/1000 MBps. The performance specifications for the two products are similar, with the only difference being the fingerprint-based security option in the Touch version. Typically, Samsung has used external SSDs as test drivers for new V-NAND generations. For example, the Portable SSD T5 was the retail debut for their 64-layer V-NAND. Based on recent announcements, it looks likely that the Portable SSD T7 Touch and Portable SSD T7 use the sixth-generation 136-layer V-NAND. [Update (1/24/2020): As part of our hands-on review, we disassembled a 1TB T7 Touch and found a flash package carrying the K9DVGY8J5A tag. This decodes as: TLC, 5th gen V-NAND (92L), 512Gbit per die, 16 dies, 1TB for the whole package. It is the same NAND package used in 2TB 970 EVO Plus.]

The key differentiating aspect of the Portable SSD T7 Touch is the addition of fingerprint-based security to go with the password protection / 256-bit AES-based hardware encryption offered for the data in the internal SSD. External drives adopting biometric security for encryption purposes are rare - the market demanding that level of security is limited. Most of the products adopting this approach (such as the Apricorn Aegis Bio 3, Verbatim Fingerprint Secure HDD, and the Imation Defender H200) carry a significant price premium, with FIPS certification added in certain products to justify it. The Samsung Portable SSD T7 Touch, aimed at casual users, is not FIPS certified. Samsung's scale and technology advancements have allowed for the pricing of the product at reasonable levels compared to the non-biometrics version. The key specifications of the Portable SSD T7 Touch and Portable SSD T7 are summarized in the table below.

The Portable SSD T7 Touch also features a 'Motion LED', allowing the user to determine device status with a single glance. The aluminum casing allows the products to weigh in at just 58 grams. 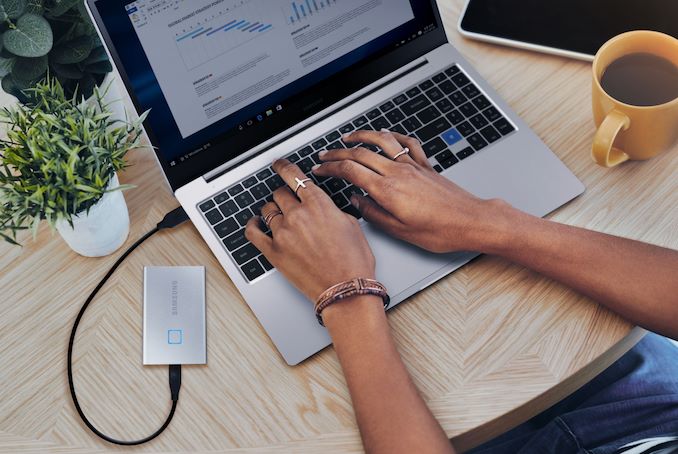 The product will be available for purchase this month in black and silver, with capacities of 500GB, 1TB and 2TB sizes priced at $130, $230, and $400 respectively. Pricing for the non-biometrics version (retail availability in Q2 2020) was not announced.