The Neophyte's Custom Liquid Cooling Guide: How To, Why To, What To Expect

When Swiftech offered to provide us with the materials to build a full custom loop, we couldn't resist.

If I've learned anything in my experiences both reviewing peripherals and discussing them with friends, especially gamers, it's that if keyboards are particular to the individual, mice are even...

Corsair launches a true successor to the venerable Obsidian 800D.

Alienware's deluxe model benefits the most from the refresh.

The successor to the H2 arrives, but it breaks NZXT's winning streak.

Prior to the Haswell generation, the Alienware M17x was the gaming notebook to get. The new Alienware 17 has a fresh coat of paint and a new moniker, but...

We've reviewed a healthy number of peripherals from Logitech, Corsair, SteelSeries, and others, but our coverage of Razer's kit has been pretty slim. Razer is one of the biggest...

People underspend on peripherals. There, I said it. Paying up for quality, be it a keyboard, a mouse, or a gaming headset, usually results in a measurably better experience...

The chassis used in the SilverStone Raven RV04 returns in its premium model: does it ameliorate the existing issues or exacerbate them?

Corsair fires a shot across the bows of Nanoxia and Fractal Design with a $99 silent enclosure.

The CyberPowerPC Gamer Xtreme 5200 system comes with this generation's best and brightest in a shiny new Intel Core i7-4770K and an AMD Radeon HD 7990. So why were...

Work in this industry for long enough, and the word "innovation" will grate like glass in your eardrums. Every so often, though, a case comes along that merits it...

Rosewill returns with a case that they claim is bigger and badder than our in house favorite, the Thor v2 and priced to compete with their own super tower...

I recently had an extended chat with a product manager at Corsair over keyboards. Their Vengeance K-series mechanical keyboards have apparently been selling well, and that's understandable; they're attractive...

A few of you have asked for it, and I certainly wanted it, and now it's here: all of our case testing data with the current set of testbeds... 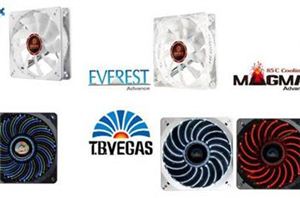 Some time ago we did a roundup of radiator fans and found that the Enermax Magma turned in remarkably impressive thermal performance for its acoustics. I'd heard rumblings here...

While cases north of $100 tend to offer the best performance and features, $99 and under is a place where vendors can aggressively innovate and differentiate between one another...

With the 530 model, NZXT continues to fill out their product line with a Phantom for every season and price tag. But is the 530 the Phantom they and...